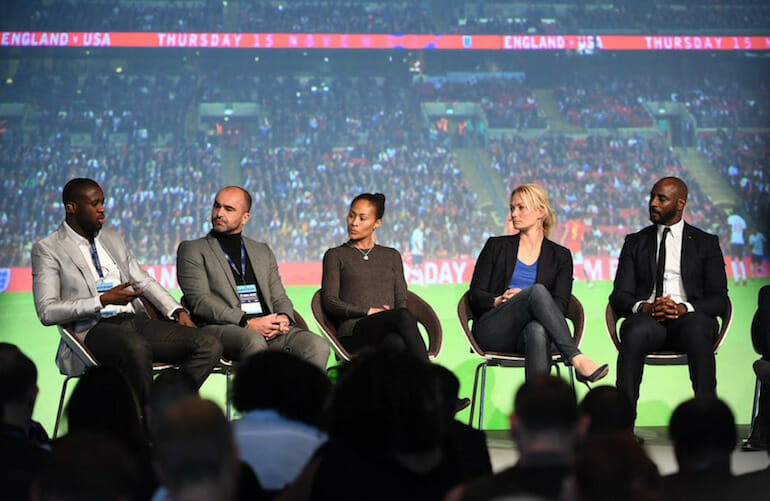 The hot topic of equal opportunity and diversity in football was up for discussion at UEFA’s Equal Game Conference at Wembley Stadium, so the football world’s governing body required Eclipse to create a design solution capable of accommodating the needs of delegates attending from around the world.

The two-day conference was to be held in the Great Hall at Wembley Stadium which has capacity for 1,800 people, yet this conference was to host just 300, so part of the challenge was to create a backdrop that would fill the vast room and ensure that the audience felt engaged and included.

Speakers from across Europe would also be taking part in the discussion, so we also needed to provide a flexible system for presentations and translations to ensure all delegates could participate and get the most out of the content being shared over the two days.

Eclipse designed a striking and engaging football-themed backdrop using a three-way edge blend projection across a single 18m x 4m rear projection screen. This helped to immerse the audience within the discussion. An Adsender switching system, coupled with a D3 media server was then used to make the most of the screen surface for presentations, ensuring all messages were delivered clearly.

A crew of 15 were involved in the production and were praised for their professionalism throughout the event, while the client also remarked on the seamless operation and impactful design from Eclipse.

Delivering a seamless event for such a high-profile client is always something to be proud of, but to do it seamlessly on a large-scale event is testament to the planning and hard work of the projects, design and operations team involved.