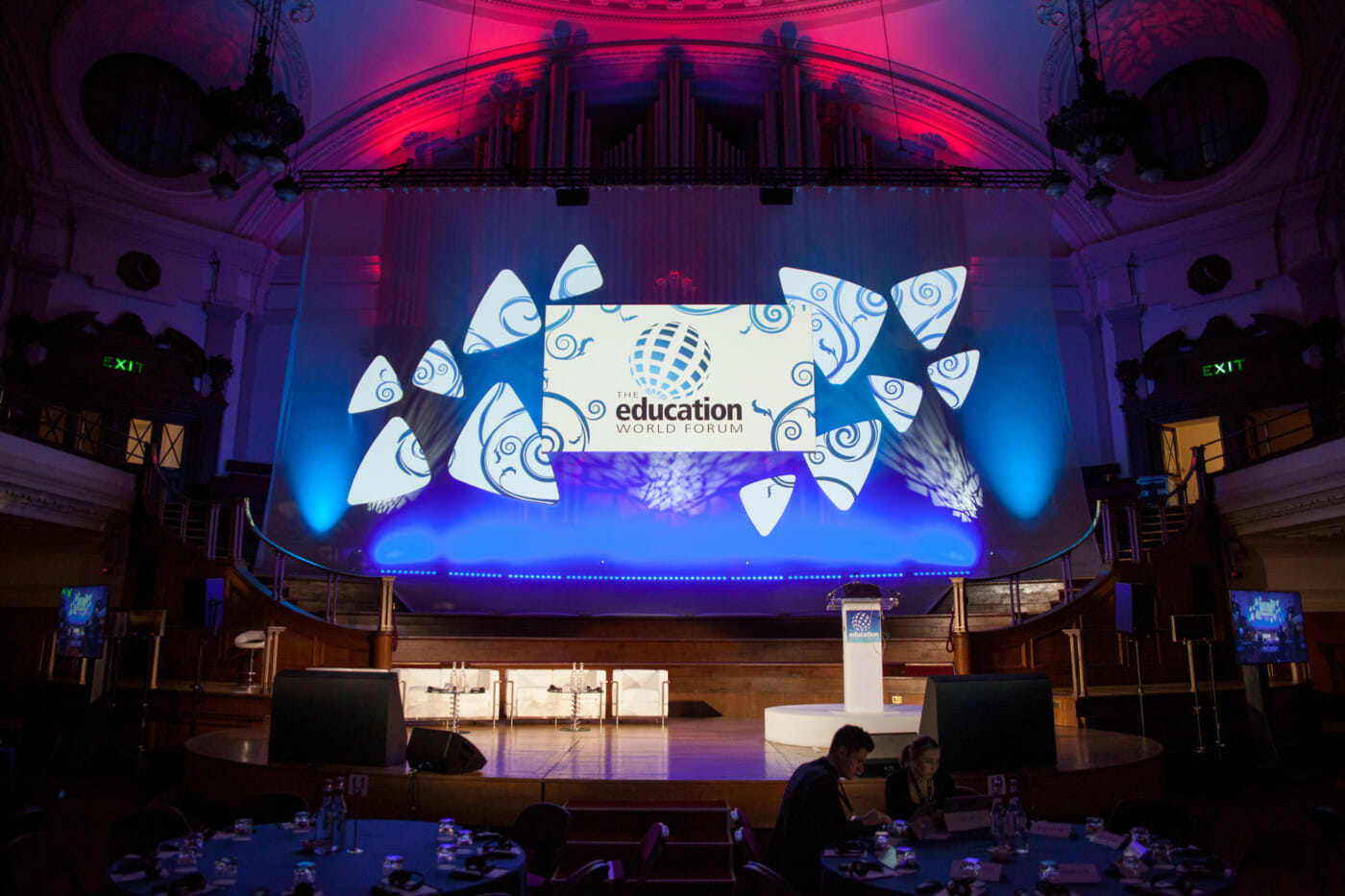 The Education World Forum took place from 17 to 20 January 2016. The event saw ministers and their senior advisers representing over 80 per cent of the world’s population gather to debate future education policy.  Held at Methodist Central Hall, Westminster, the event brings in close to 600 high profile delegates and allows sharing of ideas and knowledge to benefit education across the globe.

2016 is the fourth year in a row that Eclipse has delivered the technical production for this event, and we have built a strong relationship with the organisational team.  Understanding their objectives and having an overview of the event across multiple venues allows us to create a strong event identity.

Functionality and ease of communication is the key to a successful conference, so adequate technical provision to allow this is crucial.  We provided solutions for three simultaneous breakout sessions, an opening ceremony in the exhibition hall, as well as the main plenary in the Great Hall.

As the delegates are often returning year on year it is important to engage their attention with a striking, visually interesting solution.  The staging in the Great Hall allows us to use depth and height in the design.  We put forward two initial concepts, both significant departures from the previous year’s design.  Design one would utilise a large amount of floor mounted LED panel, spaced across the stage at different heights.  A d3 media server would be used to manage content over the whole stage.

Design two included flown gauze with circular shapes suspended above the stage either side of a flown projection screen.  The client opted for design two with a couple of tweaks, having a larger 16:9 ration screen, and replacing the flown circles with Reuleaux triangle shapes floating in front of the gauze.  These allow a large surface used for both the opening video content and sponsor branding, all controlled with d3.  This is a large improvement on the fairly standard sponsor banners used in 2015.

Once the solution was agreed we began work on custom content, an opening video sting and content to utilise the flown shapes during the conference.  The video was created with a central 16:9 area that spread outward to use the additional shapes.  This tied in with the themes of growth and development.

We looked at a number of ways to deliver the projection mapping efficiently, maximising the brightness and number of pixels available for use.  We constructed custom plinths that would allow the projectors to be mounted at an angle of 25 degrees to the horizontal; the shapes were cut from polystyrene panels, and mounted directly onto the gauze.  The lighting design used similar shapes

The delivery of the event required very precise management of resources.  An organ recital the afternoon before opening meant that set up time in the Great Hall was restricted.  To work around this we had an overnight team begin installation as soon as access was available, working through until morning to hand over to a fresh show team.  As many of our team have been involved in the event for several years we were able to split the management tasks between a group of project managers.

We supported surrounding events at St. Ermin’s Hotel, and Altitude 360 with video content and branding.  We also delivered a meeting for around 200 of the EWF delegates visiting the BETT exhibition at the Excel.

Take a look at the project images here.