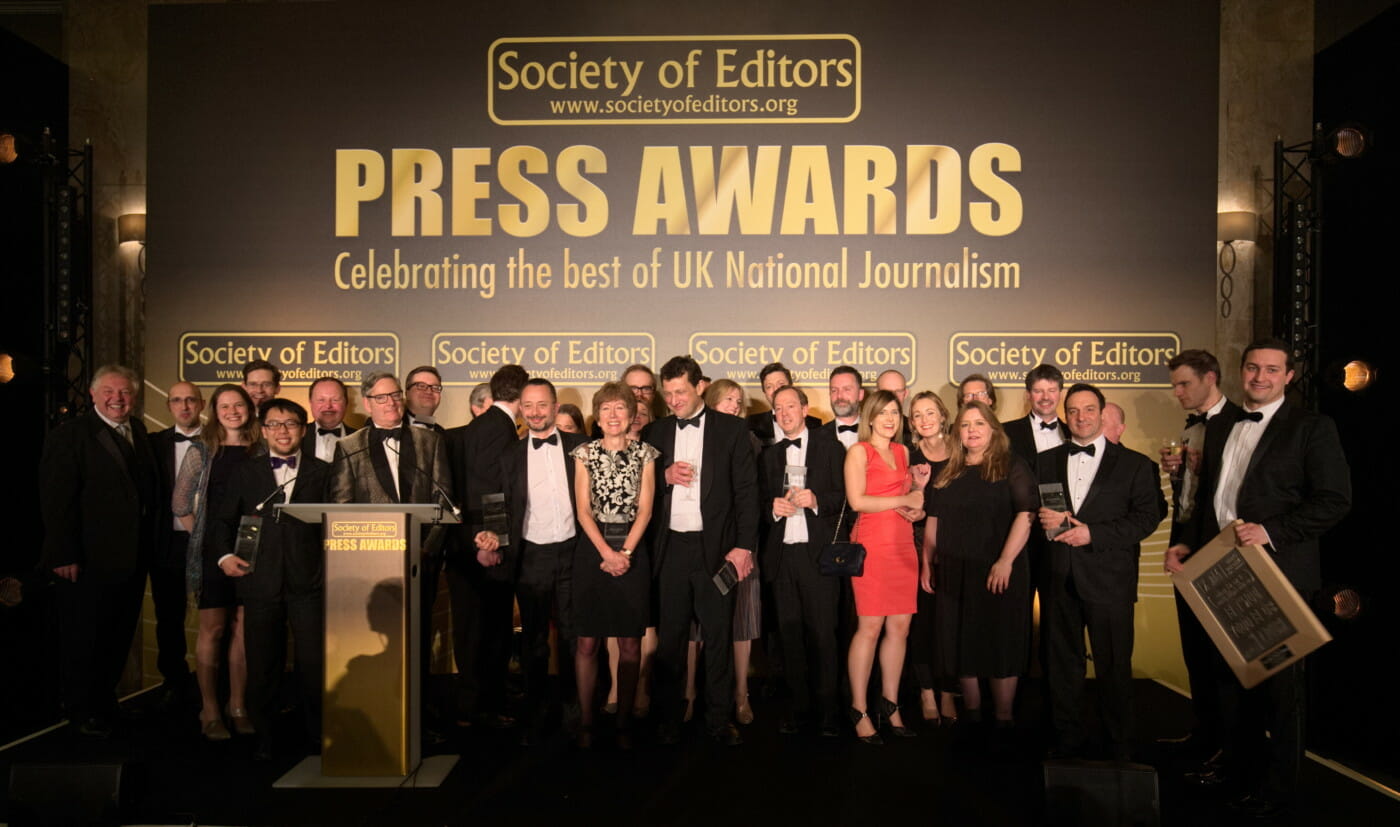 We were delighted to be involved in the Society of Editors National Press Awards, following our successful delivery of both last year’s events; The National and Regional Press Awards.  We have a strong relationship with the Society and the event organisers Magstar, going back several years, and seeing the event grow over time has been really exciting.

For 2016 the event moved to the Hilton Park Lane, a large room with plenty of space to create interesting guest experiences.  We work in the Hilton Ballroom on a regular basis and applied our knowledge and experience to specify a solution suitable for the Press Awards.

As the Society is a not for profit organisation the budget for the awards would not allow all the latest technology, and ostentatious production would not be suitable.

Our set was broken into three sections, making use of the existing marble pillars in the room, and giving a large central section.  This allowed a set that was proportional to the size of the room, but delivered in the most efficient way possible.  Fret cut lettering, printed vutek canvas and gold effect printed vinyl were used to brand the set and stage.

Inspired by recent trends in touring production, particularly the Kanye West Glastonbury lighting design we opted for a lighting system that only used static tungsten lights with no coloured lighting at all.  This tied in with the event branding, and the marble and gold textures in the venue.  To get the most out of this system we used the pixel mapping functionality allowed by the Avolites Tiger Touch console.

Host Nick Ferrari is a household name and given his broadcasting background we had to do him justice! Our sound system was designed around the K-Array KR402 system, with four speaker placements on the set line giving good coverage for the majority of guests.  This was supplemented with a small amount of D&B audio to fill the areas where coverage was restricted, and the back of the room.  The K-Array performed remarkably well in a room that has proved to be difficult from an audio perspective in the past.  Yet another use for this versatile system!

Our video system was based on the previous Press Awards events we have been involved in.  Working alongside Magstar’s Mark McCormick, controlling graphical content, and the camera team from Silverstream TV, we use a Barco Screen Pro II to overlay lower thirds, logos and animations on live video.  This is an effective way to give a Hollywood feel to an event, without using any particularly unusual equipment. The whole event was broadcast live via Silverstream TV with feeds from us.  Our Panasonic HD projectors gave a large bright image on the two screens, placed to give the whole audience a great view.

Take a look at more photos from the event in our portfolio.

Video and pictures from the event can be seen at www.pressawards.org.uk.